Alicante AS A HOLIDAY DESTINATION 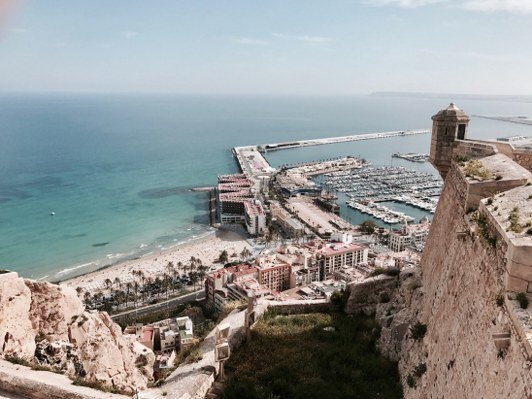 VIEW TOURS THAT INCLUDE Alicante

Ken organized a wonderful trip to Spain for us. I would highly recommend him. We had never been to Spain and it was very reassuring to have someone to organize all of the details of our travel, hotels and tours. We enjoyed each city he recommen...

Alicante is a bustling port and popular seaside resort built around a natural harbour, and the principal city of the Costa Blanca. Alicante has the warmest and sunniest winter climate in Europe. The most remarkable building of the city is the Santa Barbara Castle, which dates from the 16th century and provides a great view of the whole city and harbour.

Below the castle is Alicante’s lively old quarter, Santa Cruz. Other sites of the city are the 17th century Cathedral de San Nicolas de Bari, and the Baroque Church of Santa Maria. If you want to unwind just take a stroll around the Paseo Maritimo or relax on one of the city’s beaches.

Alicante - THINGS TO DO

In the province of Alicante is Jijona (Xixona) , where Spain’s best turron (a nougat sweet made with almonds and honey typically eaten at Christmas) is produced . See how it is made and sample some of this delicious sweets at the Turron Museum. Afterwards walk off the excess calories at the nearby Fout Roja Natural Park, breathtaking views of which can be enjoyed from Jijona town.

Elche is also a worth visiting. It has the only date-palm grove in Europe which is amazing to see.  It was in Elche that Spain´s most famous piece of ancient art, La Dama de Elche (now displayed in Madrid’s Archeology Museum), was discovered.

Spain’s third largest city is sited in a fertile plain of orange groves, and is blossoming into one of the most stylish cities on the Mediterranean. Located here is the futuristic City of Arts and Sciences, created by Santiago Calatrava. If you arrive by train to Valencia's `Estacion del Norte´ you will see one of the loveliest train stations in Spain decorated with ceramic tiles and mosaics of orange goddesses.  Valencia is also internationally know for it's Las Fallas festival; which takes place every March, when giant figures called ‘ninots’, made from paper, wax, wood and Styrofoam, are displayed before being burned ceremoniously and the entire city takes to the streets to celebrate.  See our blog post about Valencia.

This charming regional capital was founded by the Moors in the year 825 and it's centre is the 18th century La Glorieta Plaza. The most prominent building is the 14th century Cathedral, built on the site of a mosque and featuring a distinctive tower designed by four different architects. Visit the Casino which combines many different styles and the Archaeology Museum which has a splendid collection. Near Murcia´s University, housed in a 17th century covent, you´ll find many excellent tapas bars and cafes.

What’s So Great About Valencia City?