Aragon - Pyrenees AS A HOLIDAY DESTINATION 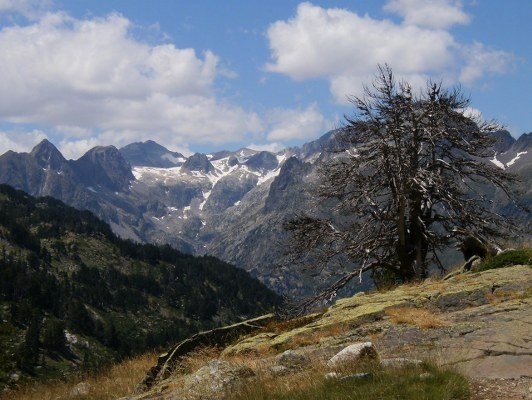 VIEW TOURS THAT INCLUDE Aragon - ...

We thank you, Totally Spain, so very much. Everyone of your team has been exceptional. The hotels you picked for us have been great - location, accommodations, etc. No complaints except that the trip should have been longer; 17 days was not eno...

ARAGON - This former kingdom in Northern Spain, which once ruled the Mediterranean, is of great interest and is marked by contrasts and magnificent countryside. It is a region rich in folklore and traversed by the highest mountains peaks on the Iberian peninsula, the Pyrenees. Here are many of Spain’s best ski resorts and prime hiking trails. Apart from it´s many different landscapes Aragon also has a rich diversity of gastronomy, culture and people.

Aragon - Pyrenees - THINGS TO DO

The landmark of the city is the impressive 17th century Basilica del Pilar. Some of the best Mudejar art can be seen here including the Aljaferia Castle/Palace, the Cathedral of La Seo, and the churches of San Gil and San Miguel.

Capital of Alto Aragon with a remarkable Gothic Cathedral (Mudejar features) and a Renaissance Town Hall.

Gateway to the Pyrenees and popular ski resort, has a well preserved 12th century Castle, the Romanesque Cathedral of San Perdro and the Church of Santiago.

The least populated city in Spain, here you find the 13th century Cathedral of Santa María de Media Villa and the mudejar church of San Pedro.

Aragon Kingdom: Its History and Geography

The Kingdom of Aragon has its origin in the 9th century and was once part of Navarra and Catalonia until its independence in the 11th century. Today Aragon is made up of three provinces: Huesca, Zaragoza and Teruel. The capital of the region is Zaragoza.

Aragon lies in the north eastern part of the Spanish mainland. It borders France in the north, Catalonia and Valencia in the east, CastillaLa Mancha in the south, and Castilla y Leon, La Rioja and Navarra in the west. The region can be separated into three different areas: the central area consisting of the Ebro basin, the northern area where the Pyrenees lie, and the area made up of the Iberian mountain range. The population is about 1.2 million with the biggest concentration being in Zaragoza (around 800,000 inhabitants). The complex mountain ranges of Aragon are the reason why there are so many different climatic changes in the region. Severe winters and hot summers are the most common characteristics.

The gastronomy of Zaragoza just as the cooking throughout Aragon, is frugal and full of quality ingredients. Zaragoza has one of the freshest vegetable cultivation in all of Spain. Meat is also of an excellent quality in Zaragoza especially lamb, and above all suckling lamb called 'ternasco' that has its own Denomination of Origin status.

Desserts comprise of nougat, roscon (large ring shaped sweet bun) and mostillo (a type of biscuit that is made from grape juice). Fried breadcrumbs, pinto beans from Monflorite, river crab, trout, sardines and pork are all typical fare from Huesca. Hams and other pork derivatives are traditional in Teruel.