Barcelona AS A HOLIDAY DESTINATION 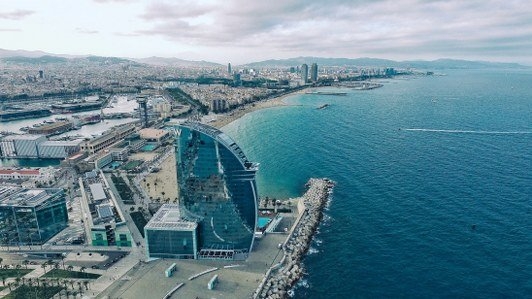 VIEW TOURS THAT INCLUDE Barcelona

We are so happy we booked with Totally Spain for our honeymoon! We are from New York and found the company through Google and verified the business. Ken responded to us immediately and was responsive throughout the entire planning process and...

But to love a city you have to love its people and its food. And this is what makes Barcelona such as popular place. We love its confidence, openness and its vibrancy. We love its colourful flea market on the Ramblas, its old Gothic city centre and the Jewish coll. We love Barcelona’s gastronomy – they’ve taken food markets to a new level at the Boqueria where you’ll find you exciting foodie tours and cooking classes to teach you about their wonderful flavours and combinations. We love their innovation and give-it-a-whirl approach – whether that's chocolate and cava tasting tours or Michelin-starred tapas. And the nightlife? Barcelona doesn’t disappoint!

If shopping is part of your holiday, you’ll love shopping in Barcelona where you’ll find the big Spanish and international labels plus plenty of independent stores, artisan crafts and the high-street essentials too.

And when you’ve seen it all, eaten it all, and almost spent it all, there are wonderful day trips to the region’s wineries, monasteries and you can explore Dali’s home and studio, his museum and the castle he bought for Gala. And should you feel like chartering a yacht for the day, in Barcelona you can easily do that too. Barcelona is one of a kind.

Barcelona - THINGS TO DO

The best known of Gaudí's creations throughout the world, the church of Sagrada Família, conceived as a "cathedral for the twentieth century", in which his genius takes on a complex religious symbology. From 1883 until his death in 1926, Gaudí worked exclusively on the Sagrada Família.

The Cathedral comprises several highly interesting constructions from different periods, although it is mainly from the 13th century. Inside are numerous features of artistic value.

Declared by UNESCO a World Heritage site. Originally planned as a garden city, it was never completed. However, the buildings by the entrance still stand, together with a staircase which leads up to a great hall (intended as a market) with 86 Doric columns supporting a mosaic ceiling. Above it is a great round esplanade offering a magnificent panorama over the city.

Palau de la Musica Canalana (1908) is one of Barcelona's most deservedly famous Modernist buildings. This architectural masterpiece by Domenech i Montaner is lavishly adorned with sculptures and ceramics and has been declared a "World Heritage" site by UNESCO.

Barcelona’s history goes back in time 2,500 years, when the Romans founded the city in the area between the Rivers Llobregat and Besos, with the disintegration of the Roman Empire the Visigoths conquered the city, as well as the Moors, centuries later. Barcelona has undoubtedly been one of the most important Mediterranean ports ever since its foundation. Today a universal, cosmopolitan city, Barcelona is a city of contrasts where the ancestral past lives on side-by-side with the most contemporary of architectures in a state of perfect harmony.

Barcelona has almost 5 million inhabitants, being the biggest concentration of population in the Mediterranean coast. Temperatures are mild all over the year, rising a bit during summer. No less than approximately 10ºC in winter and about 30ºC in summer.

In Catalonia good eating is a matter of priority for most. Catalonian cuisine, which has been subject to so many influences, is sophisticated, flavoursome and varied.. Fish and seafood are always fresh, and sausages and meats are of the best quality. This cuisine features delectable cold dishes like exqueixada (desalted cod salad), escalivada (roast aubergines, onions and red peppers) and xató (curly endive lettuce, cod and anchovies). Most popular dishes in Catalan gastronomy are butifarra (Catalan sausage with beans), longaniza (local spiced sausage) and fuet (a delicious type of salami). In addition, Catalonia is one of Spain’s great wine-growing regions and where its most popular beverage is the champagne-like cava (sparkling wine).

Barcelona to Monserrat and Codorniu Winery

What To See & Do in Barcelona in 48 hours