Basque Country AS A HOLIDAY DESTINATION 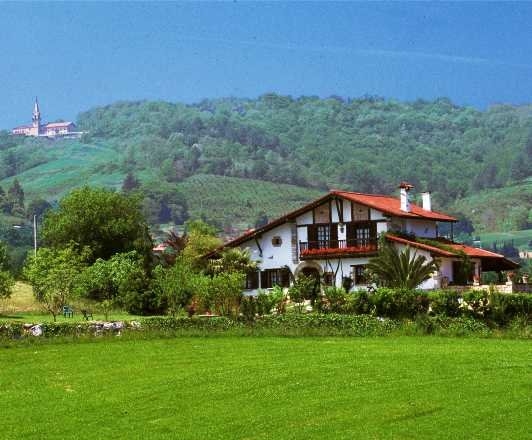 VIEW TOURS THAT INCLUDE Basque Co...

Basque Country - "Little valleys among mountains"; this is one of the best definitions of the Basque Country given by the famous writer Unamuno, who also added, "in the Basque countryside, everything seems to be at your fingertips, made to order for the people who reside here and give it life; it is a domestic landscape, homelike, where more earth than sky can be seen; it is a nest".

THE BASQUE COUNTRY HISTORY AND LOCATION

The Cantabrian sea and the Atlantic Pyrenees provide the backdrop for an emerald green landscape with gentle mountains and valleys, a craggy coastline, highlands of beech and oak trees, and to the south, the Mediterranean-like landscape of Rioja. For centuries its inhabitants have been sailors, farmers, and shepherds, who speak an ancient language the origin of which must be sought in legends rather than history.

The Basque Country is located in the North part of Spain. It occupies an area of 7,261 square kilometres and has a population of approximately 2,500,000 inhabitants.  It is constituted as an Autonomous Community whose capital is Vitoria, and it is divided into three provinces: Alava, Bizkaia y Gipuzkoa. The climate is humid and warm, being milder and wetter on the Atlantic coast, while inland there are bigger temperature changes.

There are signs of the dawning of human life in the Basque Country from the end of the Early Stone Ages, some 100,000 years ago. The Basque of today descends, through slow evolution, from Cro-Magnon man, the earliest proof of which dates back 7000 years. For centuries, the Basques have been sailors, farmers, and shepherds who speak an ancient language, bearing no relationship to any other known language.  Their origin must be sought in legends rather than history.  One thing is certain though, the Basques are the oldest and purest ethnic group on the Iberian Peninsula.

Basque cuisine, without a doubt, is one of the finest and most appreciated in Spain. Basque cuisine has been exported all over Spain and internationally.  It consists primarily of products from the sea: baked sea bream, spider crab, salted cod, baby eels, marmitako (a stew made from tuna and potatoes) and sardines.  Other typical dishes include beans from Tolosa, green peppers from Gernika, truffles from Campezo, sardines from Hondarribia, cheese from Idiazabal and marmitako from Bermeo and Lekeitio. Wines from Rioja Alavesa are outstanding as are liqueurs such as pacharan (made from anise and sloe berries), txakoli white wine and traditional apple cider.

There is an extremely high concentration of Michelin star restaurants in the Basque Country.  Totally Spain would be happy to make reservations for you in conjunction with your private custom Spain trip.

Basque Country - THINGS TO DO

Among Bilbao's many monuments the Guggenheim Museum is the most famous. Also noteworthy are the Zubi-Zuri bridge, the Basilica of Begona, Church of San Anton, the gothic Santiago Cathedral, the old town, Fine Arts Museum, Dona Casilda Park.

Capital of the Basque Country with remarkable monumental buildings such as the Gothic Santa Maria Cathedral, the Churches of San Pedro and San Miguel. Also the Plaza de la Virgen Blanca, Palaces of Escoriaza-Esquibel and Montehermoso, the entire old quarter.

symbolic home of all Basques and the Caja de Juntas, with the Oak Tree. Inspiration for Picasso´s `Gernika painting´. Also worth seeing are the Museum and Church of Santa Maria la Antigua.

Known as the Basque `Toledo´for its monumental centre.

A Trip to the Basque Country. What to see and do