Cadiz AS A HOLIDAY DESTINATION 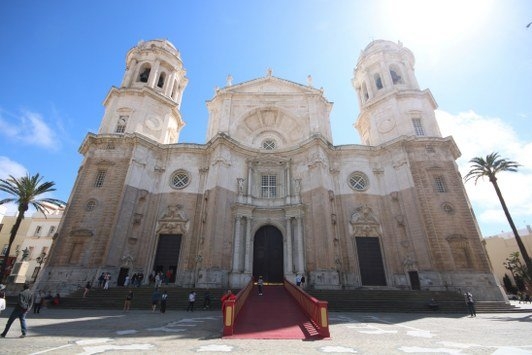 VIEW TOURS THAT INCLUDE Cadiz

We have used Totally Spain nearly half a dozen times to book trips throughout Spain and have nothing but positive things to say. Ken and his team are extremely knowledgable, very professional, and have a excellent attention to detail. We have done tr...

Cadiz stands on a peninsula jutting out into a bay, and is almost entirely surrounded by water. Named Gadir by the Phoencians, who founded their trading post in 1100 BC, it was later controlled by the Carthaginians, until it became a thriving Roman port. It sank into oblivion under the Visigoths and Moors, but attained great splendour in the early 16th century as a launching point for the journey to the newly discovered lands of America.

Cadiz was later raided by Sir Francis Drake, in the struggle to gain control of trade with the New World, and managed to withstand a siege by Napoleon's army. In the early 19th century Cadiz became the bastion of Spain's anti-monarchist, liberal movement, as a result of which the country's first Constitution was declared here in 1812.

Some of the city's 18th century walls still stand, such as the Landward Gate. The old, central quarter of Cadiz is famous for its picturesque charm, and many of the buildings reflect the city's overseas links. Worth a visit are the city's Cathedral and churches of Santa Cruz and San Felipe Neri, which is famous throughout Spain as the place where, in defiance of Napoleon's siege, the provisional government was set up with its own liberal Constitution. Other points of interest are La Santa Cueva, home to several paintings by Goya, and stately mansions such as the Casa del Almirante and Casa de las Cadenas.

The old city looks quite Moorish in apperance and is intriguing with narrow cobbled streets opening onto small squares. The golden cupola of the cathedral looms high above long white houses and the whole place has a slightly dilapidated air. It just takes an hour to walk around the headlands where you can visit the entire old town and pass through some lovely parks with sweeping views of the bay. Unlike most other ports of its size it seems immediately relaxed and easy going, not at all threatening, even at night. Perhaps this is due to its reassuring shape and size, the presence of the sea making it impossible to get lost for more than a few blocks. It also owes much to the town's tradition of liberalism and tolerance which was maintained all through the years of Franco's dictatorship, despite this being one of the first cities to fall to his forces and was the port through which the Republican armies launched their invasion.

Best Beaches in Spain | Plenty to See & Do