Cascais AS A HOLIDAY DESTINATION 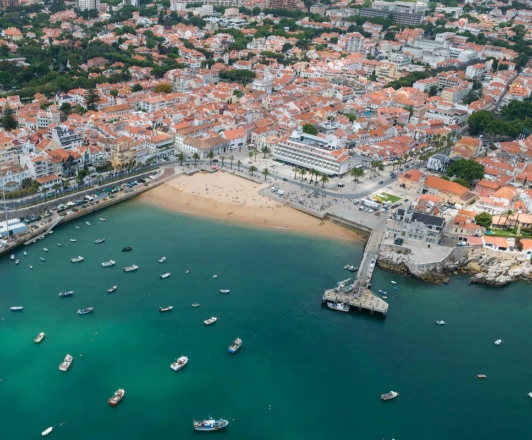 VIEW TOURS THAT INCLUDE Cascais

Belen, I just wanted to tell you how grateful I am to you for everything you organized.  Every single detail was handled and everything was perfect, exactly as you planned it.  Each hotel gave us two beds, as I reminded them at check-in had...

Lisbon is blessed to have on its doorstep a great beach resort, Cascais.  The elegant boardwalks and sandy beaches of Cascais and Estoril are just 25 km from Lisbon and have deservedly become known as the Portuguese Riviera – oozing glamour as well as history plus super clean beaches and lively restaurants and shopping.

Cascais is best known for its historical charm and heritage, with important architectural and artistic works including stately homes and museums and galleries. It became popular as a holiday destination back in the 19th century and still retains its pretty little fishing port. The Telegraph loves how its “narrow cobbled streets descend towards the idyllic beaches” and recommends visiting the market that opens on Wednesdays & Saturdays which is “loud and busy and a great way to experience the earthy side of Cascais.” The market often runs themed events and live music evenings.

If you’d like to tap into the mindset of James Bond’s creator Ian Fleming, you should make your way to the Casino do Estoril, where you can not only play the tables but you can catch some cultural events taking place too.  Fleming was inspired to create the Bond character during a stay in Estorial in 1941, a period when it  was swarmed with royalty from Spain, Italy, and Bulgaria, as well as French aristocrats, wealthy dealers, uprooted Jews, and the spies keeping a close eye them all.

For the best local Cascais beaches, we encourage you to check out Carcavelos beach; ideal for surfing, and Guincho beach, which is considered paradise by windsurfers. And for the best Cascais dining with a sea-view, you have to eat at the Fortaleza do Guincho which is a Michelin-starred restaurant located inside the 17th century hotel which has stunning views of the beach.

Golfers will already know that this is an area with magnificent courses and that the region was named IATGO Best Golf Destination: Europe in 2007 and again in 2016. If hiking is more your thing, the amazing Parque Natural Sintra-Cascais is just a few kilometres away – and you’ll find the Cabo da Roca which is said to be Europe’s most westerly point. The park contains some great beaches and villages where you could easily spend a full day exploring.