Coimbra AS A HOLIDAY DESTINATION 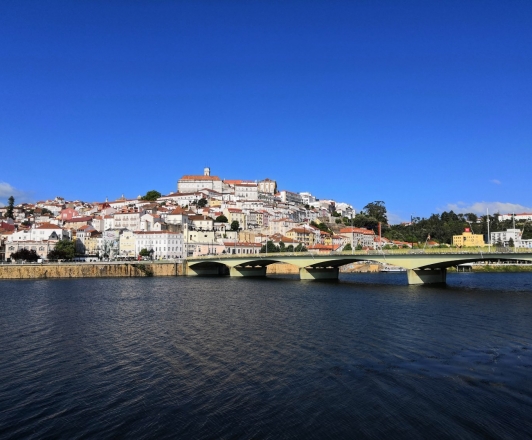 VIEW TOURS THAT INCLUDE Coimbra

Thanks to Belen Encines and her superb advice and planning, my trip to Spain was everything I hoped it would be. All the travel arrangements, drivers, and hotels were excellent, the tour guides, especially Estela in Sevilla and Antoneo in Granada, we...

Best known for its university and Romanesque cathedral consecrated in 1184, Coimbra was the first capital of Portugal in the 12th century. It goes back a long way as you’ll be able to tell if you visit the Roman settlement of Conimbriga. The city is now a World Heritage Site since 2013 and an obligatory stopping point between Lisbon and Oporto.

First port of call will be Europe’s oldest university established in 1290 – the wonderful baroque wooden panelled library gives a great sense of the status and history of the college. The student population hovers around the 20,000 mark and you’ll be amazed to see many of the students wearing a black student cape. The former palace is a must-see. The university degrees are now handed out in what was the royal bedroom! A visit to the Museo Academico is also worthwhile.

The Telegraph call it “a city with a glorious past, a poetic soul and a unique sound”. Coimbra has its own fado tradition and a visit to the Fado Centre for a performance will give you a great insight into the music – here you’ll only find men performing. The Rio Mondego is also worth exploring and where better to cross than the Belmond pedestrian bridge? The Guardian is also a fan of Coimbra and its “fairytale history… reinventing itself with imaginative new design and architecture.”