Cordoba AS A HOLIDAY DESTINATION 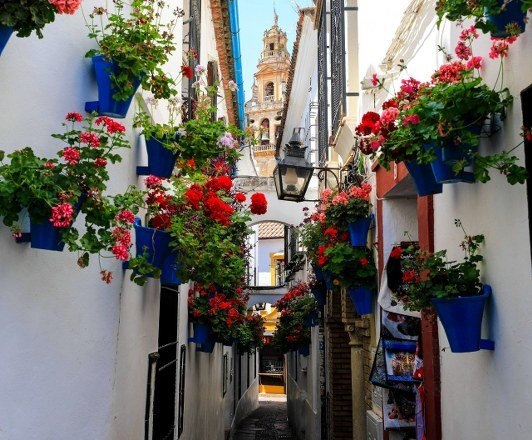 VIEW TOURS THAT INCLUDE Cordoba

Ken organized a wonderful trip to Spain for us. I would highly recommend him. We had never been to Spain and it was very reassuring to have someone to organize all of the details of our travel, hotels and tours. We enjoyed each city he recommen...

This is the ochre-tinted city that throws opens its doors every May to showcase its wonderfully decorated courtyards. But there’s more to see than terracotta pots in Cordoba.

The Guardian tells us that this former Islamic capital “still holds the keys to huge tranches of our past, both spiritual and intellectual”. Nowhere is this more evident than at Cordoba’s Mesquita or mosque. Built by Abd al-Rahman I in the late eighth century during the Arab occupation of Spain, it was consecrated in the 13th century when Christians seized the city. In 1984, it was declared a UNESCO World Heritage Site and was praised for the co-existence between the mosque and the 16th century Christian cathedral (that was built inside the structure of the original mosque). Nothing can prepare you for the columns and arches inside. It really is spell-bindingly beautiful.

No visit to this multicultural city is complete without a visit to the former Jewish synagogue. It was built in the 14th century and has even served as a hospital and a cobbler’s workshop according to the Conde Nast Traveller who calls it “a touching monument to a vanished community.”

But what we love most about Cordoba is the outdoors – taking a photo of the orange trees in the Patio de los Naranjos, having a coffee in the Plaza de la Corredera or the Plaza del Potro, walking about the twelve courtyards at the 14th century Viana Palace or strolling across the roman bridge in the evening, over the Guadalquiver river, to admire the city illuminated.  And of course we musn't forget the amazing Patio Festival in May; you won’t find that sense of wonder, as you push open the huge wooden plinths of doorways and steal into a state timelessness, anywhere else.

Easy day trips from Cordoba include Seville which is only 50 minutes by high speed train and Carmona which can be reached by car in an hour.

Courtyards Blossoming in May for the Cordoba Patio Festival