Evora AS A HOLIDAY DESTINATION 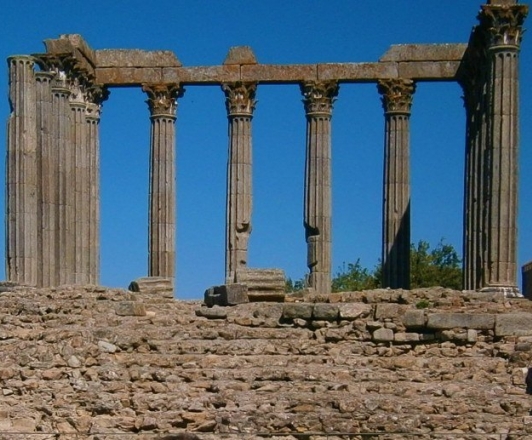 VIEW TOURS THAT INCLUDE Evora

Belen Encinas from Totally Spain assisted us in planning an unforgettable trip to northern Spain! I had taken a similar trip 16 years ago with my younger son, who was studying in Spain. My husband was not able to join us because of work responsibilit...

Lovely Evora is located just 90 minutes east of Lisbon city by car, in the centre of the Alentejo Region of which it is the capital.  It’s roughly half way between Lisbon and the Spanish border.  Ideal for a daytrip from Lisbon and even better, for short stay.  The New York Times describes Evora as “2,000 years of history in 20 paces.” The architecture inside this beautiful walled town includes Roman, Gothic and Baroque styles.

The Alentejo - meaning `land beyond the Tagus´ - is quite dry and can get very hot in the summer.  It has a well earned reputation for having an easy, unhurried pace of life.  It is known for its cork oak woodlands, sun-baked olive groves, fortified towns and quaint villages.  Also, a wonderful gastronomy and excellent wines.

The entire historic walled centre of Evora is a UNESCO World Heritage site stemming from it’s Golden Age in the 15th century when it was home to the Portuguese Kings.  The town centre is very pretty with its white-washed houses adorned with azulejos (tiles) and wrought-iron balconies dating from the 16th to 18th century.

Must-sees include the Roman Temple dedicated to Augustus, the Roman aqueduct, Giraldo Square, the cathedral, the Capela do Calvário at the Church of San Francisco for its carvings, and the Chapel of Bones.  If you are staying longer we suggest seeing the Palace of King D. Manuel, the chapel of St Blaize, and the houses of Cordovil, the Casa de Garcia da Resende and the university.  And leave lots of time for wandering around the charming cobbled streets. Be sure to try the pastries especially the delicious apple and cinnamon pastries called boleimas.

If megalithic structures are your thing, you’ll find fascinating the 95 menhirs or standing stones that overlook the city.   And for those interested in Jewish history, during the Middle Ages, Evora was home to one of the largest Jewish populations in Portugal.

We highly recommend including Evora while visiting Portugal and we would be happy to incorporate a stay here as part of your custom private tour of Portugal, or as part of a longer Spain and Portugal itinerary.

Prettiest Villages and Towns in Portugal

Totally Spain’s Guide to the Best of the Alentejo Portugal