Madrid - Daytrip to Toledo AS A HOLIDAY DESTINATION 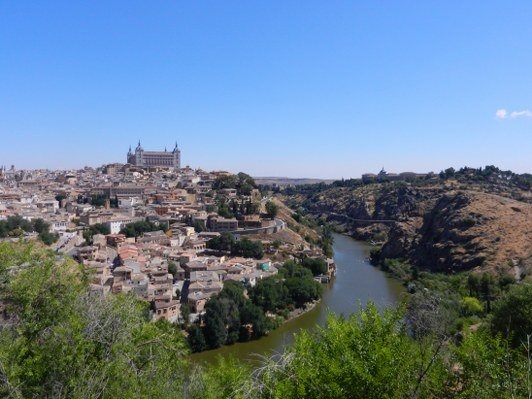 VIEW TOURS THAT INCLUDE Madrid - ...

Hello Belen, We are back home after a fantastic Totally Spain vacation, thanks to you! Art and I would like to express our sincere gratitude for the amazing tours and comfortable transports you arranged for us for 39 days. It was a perfect comb...

You can discover the magical city of Toledo on a daytrip from Madrid. The city of Toledo is the capital of the province of the same name, and is also the capital of the Autonomous Community called Castilla-La Mancha. The city is located at 529 metres above sea level, in the Castillian meseta (plateau), practically in the centre of the Iberian peninsula and just 70 kilometers (43 miles) south of Madrid.  The monumental city centre sits atop a craggy rock, which is almost entirely encircled by the Tagus river.  UNESCO declared Toledo a World Heritage city in recognition of its uniqueness and its past as a host to Christian, Islamic and Hebrew culture which the splendid architecture of the city still relects - being almost impossible to walk its streets without stumbling on a Gothic or Mudejar church, an ancient mosque, a Romanesque or Visigothic structure, a former synagogue or a Renaissance palace.

You'll be transferred from your hotel to Madrid train station to board the high speed train to Toledo.  Upon arrival you’ll meet our expert local Toledo guide who will first take you to tour the Cigarrales area for magnificent panoramic views of Toledo city across the Tagus River.

Your guide will lead you on a walking tour exploring the old city while you learn about the three cultures that lived side by side during the Middles Ages and see the most important sights in Toledo including Zocodover Square, Alcazar of Toledo, Santo Tome Church,Transito Synagogue, Santa Maria La Blanca and cathedral (entrance included).

Free time for lunch and sightseeing at your leisure before returning to Madrid by high speed train where you will be met by your driver and transferred back to your hotel.

You only need to let your Totally Spain agent know and we can include a daytrip to Toledo from Madrid as part of your very own custom private tour in Spain.