Ronda AS A HOLIDAY DESTINATION 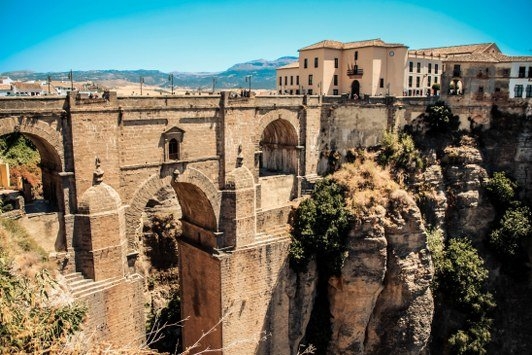 VIEW TOURS THAT INCLUDE Ronda

Totally Spain booked trips for us through both Northern and Southern routes - pre-pandemic, and now again as we reschedule and rearrange our plans once again - past-the-worst-of-it-pandemic. Ken Baldwin carefully choose hotels suited our needs. Dr...

Ronda, what a lovely place,  with it’s old medina and Arab baths is well-worth visiting and staying in while touring Andalusia.

It is famous for its connections with Hemingway, its taurine traditions and, what has to be, Spain’s most photographed bridge. The Puente Nuevo is the newest and largest of three bridges that span the 120-metre-deep chasm that contains the Guadalevín River and divides the city of Ronda. Don’t let the word ‘nuevo’ fool you. It’s been here since 1793. Right beside the bridge, on the lip of the El Tajo Gorge, you’ll find what was the town hall and is now a 4 star Parador Hotel – the views from the outdoor terrace are amazing!

Whether you agree with bullfighting or not, the Maestranza bullring is another major landmark that’s hard to miss – you can visit the museum. Ronda has been linked with bullfighting since 1572 when King Phillip II of Spain established a royal cavalry in the town.  The Feria de Pedro Romero in Ronda in September -  5-day festival - is a great opportunity to see the social and cultural aspects of bullfighting – especially at the Corrida Goyesca.

You’ll find plenty to see in the town and closeby, there are a number of excellent olive oil producers and some very interesting wineries. Ronda is a great stopover between Seville (128km) and Granada (178km). It’s also a good base for touring the White Villages `pueblos blancos´ while being close to Malaga city too (100km).

Hemingway – a regular visitor to Ronda – is said to have based a chapter of his book ‘For Whom the Bell Tolls’ on events during the civil war in Ronda. Orson Welles was another regular visitor; his ashes are buried outside the town on the land of the bullfighter Antonio Ordoñez.