San Sebastian AS A HOLIDAY DESTINATION 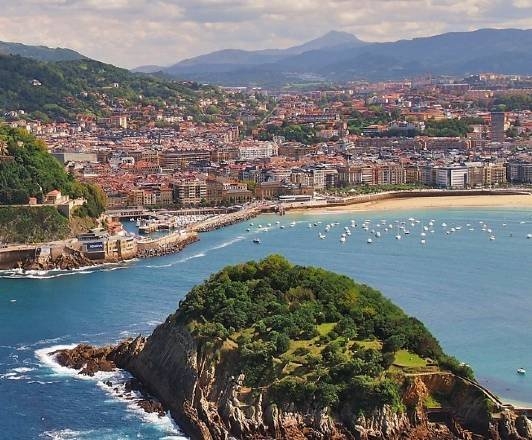 VIEW TOURS THAT INCLUDE San Sebas...

Wow - what an adventure! We all thoroughly enjoyed ourselves and were hugely impressed with Andalucia and all it had to offer. Thank you for putting together such a memorable trip with such care and attention to detail. The hotels and their locati...

“To visit San Sebastián,” says the New York Times, “is to fall in love. The first sight of the shimmering scallop-shaped bay, replete with crescents of golden sand and turquoise waves, will sweep you off your feet. Pairing this natural beauty with the unrivaled local cuisine may leave your head spinning.”

The London Independent agrees, “there are many reasons to visit San Sebastian,” it writes. “You could come for the surfing, to shop at its upmarket boutiques or for the annual international film festival. Frankly just show me the way to the next pintxo bar.”

Once the stomping ground of the Spanish royals, today you’re more likely to be rubbing shoulders with a restaurant critic or a Michelin-star chef in  this former European Capital of Culture (2016). At time of writing there are 25 Michelin stars in the city and reservations move like quicksand especially when the city hosts events such as the International Film Festival in September or the Tamborrada drumming festival in January.  Restaurants such as Akelarre, Arzak and Martín Berasategui are legendary here and in high demand.

But don’t worry if you don’t get to a Michelin-star restaurant – there’s plenty of amazing cafés, bars and restaurants in which to enjoy the city’s gastro reputation. And in a foodie town like San Sebastian, even the foodmarket has a real sense of exclusivity  - make sure you pop along to La Bretxa food market in the morning to see its wares and clientele.

Make sure to admire this belle-epoque city too. And we love the funicular to the summit of Mount Igueldo. Also the fisherman's quarter. Plus the stunning beaches – that’s where it all began - keep an eye out for Eduardo Chillida’s iconic Wind Comb sculpture. Other festivals worth catching are the sailing regatta and International Jazz Festival in July, the city’s fiestas in August, the rowing championship in September and Gastronimika in October.

San Sebastian is known as Donostia in the Basque language.

A Trip to the Basque Country?

Northern Spain – What to See & Do