Segovia AS A HOLIDAY DESTINATION 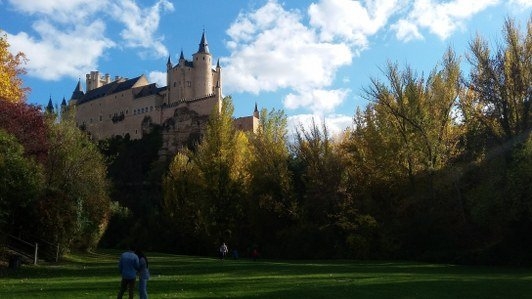 VIEW TOURS THAT INCLUDE Segovia

I have worked with Ken & Totally Spain since 2006. He has helped me plan several trips to Spain for my clients and ALWAYS knocks it out of the park. I have great confidence working with a company that is so dialed in on a destination as they a...

“Segovia is one of those small cities that Europeans do so well,” says the New York Times, “sophisticated, full of sights and mysteries, it is graced with a castle and a cathedral and the greatest monument of Roman occupation in Spain, an aqueduct.” Made from 25,000 granite stones, this mortar-free aqueduct is breathtakingly beautiful and is one of the Roman empire’s most impressive civil engineering works.

Conde Nast Traveller is a fan too, “A summer retreat for Spanish kings and queens for many decades due to its cooler climate, Segovia flourished with the wool boom in the 15th century, and its architecture is a rich cocktail of three cultures—Christian, Muslim and Jewish” .

This golden-hued Castilian city is lovely to stay in but us also a perfect daytrip from Madrid, taking just 45 mins on the high speed AVE.  To visit the 12th century Alcazar is to take a stroll through Castile’s history – from Alfonso the Wise, to Isabella the Catholic and Juana La Loca. You can make up you own mind as to whether it was the inspiration for Walt Disney’s castle or not. The cathedral in Segovia is another treasure  - the tower and the individual chapels are well worth visiting.

Do you want to know what keeps us going back? We love it for its shimmering Castile elegance. The Plaza Mayor is a real dazzler. And culturally you’ll always find something to see or do. Did you know that the Hay-on-Wye Festival runs a sister event in Segovia every September? On previous years 15 different churches rang their bells to officially open the programme. Segovia is special.

Totally Spain’s Guide to Touring Alcazars and Castles in Spain