Seville AS A HOLIDAY DESTINATION 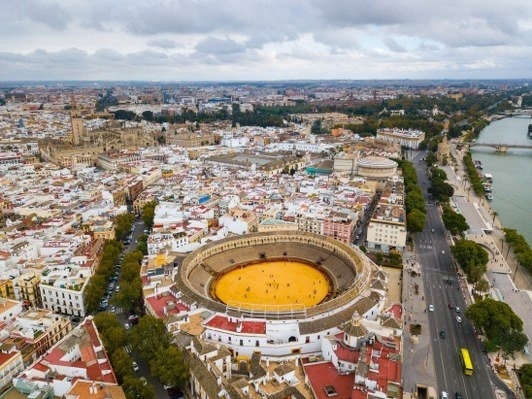 VIEW TOURS THAT INCLUDE Seville

We thoroughly enjoyed our trip to Spain in September 2021. The food was great as were the mosques, temples, hotel accommodations and people. We traveled through Madrid, Toledo, Seville, Ronda, Granada, Cordoba and Barcelona. The Totally Spain organiz...

If you are looking for enchanting Spain, then look no further than Seville. It is without doubt the most romantic of the Spanish cities – where else will you find streets graced with horse-drawn carriages and wake up to the scent of orange blossom? Although Seville always had its fair share of visitors, monuments such as the 9th century Alcazar, the Giralda and Plaza de Espana have been even busier than usual following the filming of the HBO series Game of Thrones in 2014.

We love the atmosphere of the Barrio Santa Cruz which was the old Jewish quarter in Seville. It’s a wonderful place to walkabout and people-watch while sipping a drink at a café. Pop into the Hospital los Venerables to see a Velasquez painting and enjoy one of Seville’s wonderful private courtyards with a fountain.

The  Alcazar is the oldest active royal palace and a must-see in Seville. The Telegraph recommends this “Moorish fortified palace adapted by later Christian kings. When you have explored the highly-decorated courtyards and state rooms, take a break at the garden café, and leave plenty of time to explore the gardens.”

If you like your history, Seville cathedral will be at the top of your list. According to Frommers, its “Gothic structure is so enormous that even its builders recognized the folly and fanaticism of their dreams.” Built on the site of a former mosque, it’s the largest Gothic cathedral in the world and is the burial site of Christopher Colombus who docked here on his return from the Americas and put this city on the international trading map. Make sure to climb the Giralda bell tower where the views of the city are wonderful and as you exit, you should visit the Patio de los Naranjos (Orange Courtyard).

Opera fans will enjoy a visit to the Royal Tobacco Factory – the workplace for Bizet’s Carmen. Just south of the Tobacco Factory, you’ll find Seville’s beautiful botanical park - the Maria Luisa - alongside which you will find the magnificently tiled Plaza de Espana.

Shoppers should explore Calle Sierpes for traditional items such as fans, ceramics and leather goods. Anybody with a little girl in their life should pick up a feria-inspired flamenco dress or the flamenco shoes and castanets. And don’t leave Seville without seeing some live flamenco – you’ll thank us for it - really.   As for daytrips, magnificent Cordoba and it's mighty mosque-cathedral is just 40 minutes away by high speed train.  And Jerez, birthplace of the famous Andalusian horse and sherry wine capital of the world, is just an hour away.