This suggested 10 Night Self Drive Andalusia Holiday - takes you across Andalusia where the influence of different cultures combine to bring an amazing mixture of scenery, art, history, architecture, monumental cities, stunning coastline and wonderful gastronomy, together in one.  Stay in specially chosen hotels where you will enjoy a friendly...

This suggested 10 Night Self Drive Andalusia Holiday - takes you across Andalusia where the influence of different cultures combine to bring an amazing mixture of scenery, art, history, architecture, monumental cities, stunning coastline and wonderful gastronomy, together in one.  Stay in specially chosen hotels where you will enjoy a friendly welcome and be able to discover the true character of each place visited. 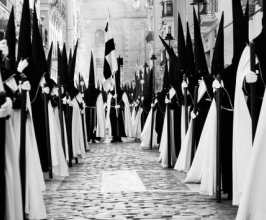 Arrive in Malaga airport. Your private driver will be waiting to take you to your centrally-located 4-star hotel.

Malaga, birthplace of Pablo Picasso, is the major coastal city of Andalucia and is a genuine and typical Andaluz city with a gritty individualism unspoilt by mass tourism and the passage of time.

Here you´ll find the Cathedral, a mix of styles, begun in 1528 and with a half built tower that gave the building its nickname “La Manquita” (the one-armed one). Also worth visiting is the Picasso Museum, the Fine Arts Museum, which has works by Ribera, Murillo and Zurbaran, as well as some works by Pablo Picasso from his childhood.

Explore as well the vast Alcazaba of Malaga, built between the 8th - 11th centuries. On display here in the Archeological Museum are Phoenician, Roman and Moorish artifacts as well as a remarkable, partially excavated Roman Amphitheatre. Behind the Alcazaba are the ruins of the Castillo de Gribralfaro, a 14th century Moorish style castle. 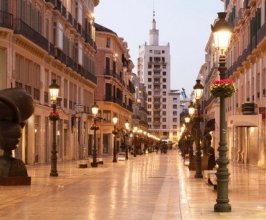 After breakfast you’ll be met at your hotel by your expert local Malaga guide who will take you on an private tour of the historic city centre. This is an exclusive History Tour for real travelers who want to discover the vast history of Malaga and Southern Spain. This 3-hour tour will start with the visit to the must-see monuments in town as the Fortress (Alcazaba), Roman Theater and Cathedral as well as the Historical Center of Malaga with all tickets included & fast track.

This afternoon visit the Picasso Museum at your leisure as we have included pre-booked tickets for you that avoid lining-up.  Enjoy the permanent exhibition, in Malaga since 2003 which contains almost 200 original pieces of art made by Picasso. 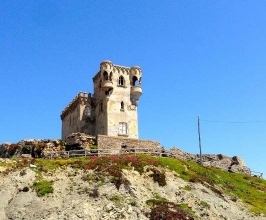 Today you'll pick up your car and drive south west to TARIFA, near GIBRALTAR, which is the most southern point in Europe.   This is where the Mediterranean meets the Atlantic Ocean and provides spectacular views across to the Rif Mountains of Africa.  Tarifa is famous for its 6 miles of white sandy beaches and some of the best windsurfing & surfing conditions in Europe. From here you can cross the border and visit the rock of Gibraltar, which is part of Great Britain, although one of the most rewarding experiences is to simply tour the coast between Tarifa and Cadiz.  It is quite unspoilt and holds many surprises such as the Roman ruins located overlooking the magnificent and peaceful PLAYA DE BOLONIA near ZAHARA DE LOS ATUNES.  Also be sure to visit the village of VEJER DE LA FRONTERA which is one of the prettiest white villages in Andalucia.  You will find several great restaurants here too.

Today you'll cross the Straight of Gibraltar to visit Tangiers, in Morocco, on a private full day tour with your expert Tangiers local guide. In the afternoon return to Tarifa 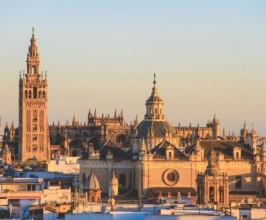 Driving from Tarifa to Seville, we recommend stopping in Cadiz to see the Old Quarter which is superbly preserved.  With its colonial style buildings it is reminiscent of towns found in south America or Cuba.

From Cadiz continue north stopping in JEREZ DE LA FRONTERA to visit the ROYAL SCHOOL OF EQUESTRIAN ART and one of the Sherry wineries.

The guided visit at the winery lasts 90 minutes and includes a tasting of 3 wines.

Following the winery visit it´s a very short walk to the Royal School of Equestrian Art where you will enjoy preferential seating (1st or 2nd row) at an unforgettable performance featuring the famous Andalusian Horses.

The show is an equestrian ballet accompanied by Spanish music and 18th Century style costumes, all put together and choreographed using movements based upon Classic Dressage, Doma Vaquera and the daily chores of traditional equestrian work. Each show consists of between six and eight different choreographies.

In the afternoon continue to Seville and check in at your 4 star hotel.

This morning after breakfast meet your  expert local Seville guide at your hotel for a walking tour of Seville’s Barrio Santa Cruz (the old Jewish quarter).

You will visit the cathedral from 1506 that houses the remains of Christopher Columbus. Standing on the site of a great mosque, the structure features mudejar, gothic, renaissance, baroque and neo-classical styles, as well as the old minaret of the Arab mosque. It’s a wonderful space to experience.  Enjoy the sublime Patio de Los Naranjos (Courtyard of the Orange Trees) beside the cathedral. Also tour the Alcazar, site of the marriage between Carlos V and Isabel of Portugal in 1526. Its two beautiful outdoor courtyards are spectacular and indoors the tapestries and furniture are superb.

Rest of the afternoon is at leisure. 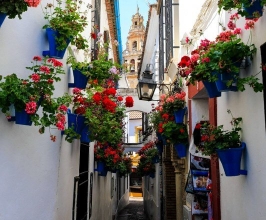 Today following breakfast you'll be transferred from your hotel to Seville train station for your high-speed train to Cordoba famous for its well-preserved Jewish quarter and the mighty Mezquita (mosque-cathedral).

You'll meet your private expert local Cordoba guide and spend the afternoon exploring the city that was the great Moorish capital of Al Andalus. A walk around the old Jewish quarter gives the sensation that little has changed since the 10th century. Visit the Mosque-Cathedral or Mezquita which is without doubt one of the most famous constructions in all of Andalusia and is one of the largest mosques in the Islamic world. The original Mosque was built between 786 and 788 by Abd ar-Rahman, but over the centuries, many additions and extensions have been made. Following the Christian conquest it was consecrated as a Cathedral in 1236.

Visit the Synagogue built in 1314, a beautiful Mudejar building nearly perfectly preserved and the only synagogue in Spain from that time not to have been turned into a Christian building. See Almodovar gate or ‘Gate of the Jews’ as it is known locally and the monument to the great Jewish doctor and philosopher, Maimonides.

After your private Cordoba tour enjoy time at leisure for lunch and to explore independently. We recommend a walk to the Roman bridge across the Guadalquivir river. You may wish to visit the Alcazar de los Reyes Cristianos (Fortress of the Christian Monarchs) a Mudejar palace from 14th century with a beautiful Moorish garden complex, which served as the seat of the Inquisition´s Tribunal in the 15th century. Try to see a number of the beautiful courtyard patios too which are throughout the Old Quarter.

Then transfer once again to Cordoba train station for the speed train back to Seville.  Upon arrival meet your driver and transfer your Seville hotel. 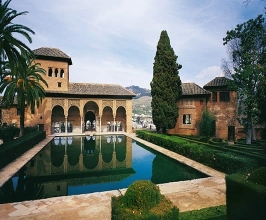 Next drive east to historical GRANADA which is scenically located at the foot of the SIERRA NEVADA mountains. As it was the last Moorish capital in the Iberian Peninsula, you can look forward to an abundance of artistic grandeur embracing Moorish Palaces and Christian Renaissance treasures such as the priceless Alhambra Palace; a UNESCO World Heritage Site.  Also the Generalife & Gardens, the ALBAICIN district and SACROMONTE famous for its gypsy cave dwellings and flamenco music. The province of Granada is characterised by geographical and scenic diversity; if you have time drive to La Alpujarra, Guadix or Montefrío. 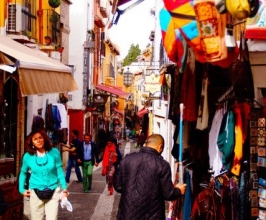 Today, following breakfast, transfer from your hotel to meet your expert private guide again for a private guided visit of the Alhambra Palace and Generalife Gardens.

This complex of palaces built around courtyards of flowering trees, pools and fountains is often hailed as the most exciting, sensual and romantic of all European monuments. It’s beauty shows the brilliance and spirit of the Moorish culture in Andalusia at a time when the rest of Europe was only just beginning to emerge from the Dark Ages. You will also tour the Generalife - the Summer palace and gardens of the Sultans. It is one of the oldest surviving Moorish gardens. Prepare to be wowed by the water features and courtyards.

The hill of La Sabika, overlooking the Darro valley, was the site chosen for the construction of this colossal palatial city used by Nasrid Sultans as their residence. Built between the 13th and 15th centuries, the monumental complex, enclosed by solid walls, is an expression of the artistic styles which flourished in the late Muslim period in Spain. The Alhambra complex includes four different parts: the  Arab Palaces, such as that of Comares, which contains Los Arrayanes courtyard and the Hall of Ambassadors; Los Leones, which includes the famous courtyard of the same name and halls such as Las Dos Hermanas and Los Reyes, beautifully decorated with intricate plasterwork  and mocarabes (geometrical patterns which the Arabs decorated domes and ceilings); the military zoe or Alcazaba; the city or Medina; and the Generalife Gardens. Loyal to their traditions with the use of water, the Muslims provided the Alhambra with paradise-like gardens in which fountains and water are the central feature. In addition, remains of the Arab Baths still survive. The Alhambra captivated Christian Emperor Carlos V, who ordered the construction of his renaissance palace inside the complex. The palace today houses the Alhambra and Fine Arts Museums. For its extraordinary artistic and historic importance, both the Alhambra and Generalife Gardens are UNESCO World Heritage Sites.

This afternoon is at leisure to relax and enjoy Granada.  Perhaps go for lunch at a ‘Carmen’ (a traditional country house in the Albaicin) with stunning views of the Alhambra or maybe enjoy refreshments in the open air with some of Granada’s legendary tapas.

Today return to Malaga, choosing a scenic route via the coast visiting Motril and Nerja en route.  The Parador in Nerja enjoys a lovely situation overlooking the beach and would be an ideal place to stop for lunch. Drop off the car in Malaga and spend your last night in the city before returning home. 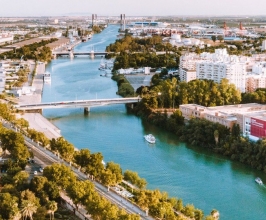 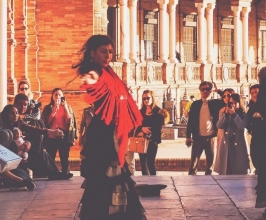 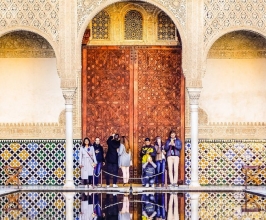 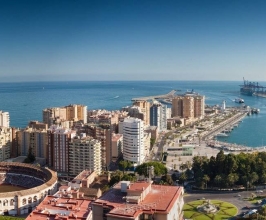 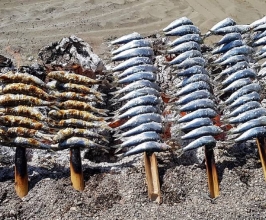 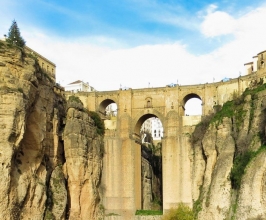 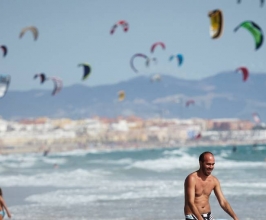