Tour commences in Limpias, Cantabria on a Sunday.  Contact us to check availability on your dates.

Santander and Bilbao airports are ideal to fly into. Departure from Santiago de Compostela.

Tour commences in Limpias, Cantabria on a Sunday.  Contact us to check availability on your dates.

Santander and Bilbao airports are ideal to fly into. Departure from Santiago de Compostela. 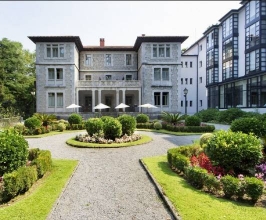 The Parador de Limpias is located in the Palace of Eguilior estate, which was the summer headquarters of King Alfonso XIII's Council. The palace belonged to Don Manuel de Eguilior, the Count of Albox, and is attributed to the architect Emilio de la Torriente.

The palace is a large square building with four pseudo-towers at each corner, none of which is very high. Built in a rustic style, some of its most notable features include the masonry of its walls (contrasting with the corner ashlars) and especially the large balconies and entrance gate with a touch of modernism. The estate boasts a variety of catalogued trees (some have been designated as World Heritage) and it is located in a region of considerable ecological value.

Housed in a building that reflects the typical architectural style of the region, and in complete harmony with its surroundings, the Parador offers all the services corresponding to an establishment of its category, with the added value of a large wooded area and gardens, seasonal swimming pool, and tennis and paddle-tennis courts, all in grounds measuring some 55,000m2.

HIGHLIGHTS: The town of Limpias is home to the parish church of San Pedro. In the surrounding area there are any number of interesting coastal fishing towns including Laredo, Castro Urdiales and Santona. Another option is to make the town’s natural surroundings the focal point of your trip, with visits to the Cabarceno Nature Wildlife Reserve or Ason Valley. Santander, the beautiful Cantabria capital, and Bilbao with the Guggenheim Museum, are other attractions easily visited from Limpias.

Comfortable en suite rooms with a pleasant atmosphere help the guest to find peacefulness and rest. The restaurant and bar, located in the nearby Parador de Santillana Gil Blas offer guests the opportunity to sample Cantabrian cuisine's most traditional dishes.

HIGHLIGHTS: Santillana del Mar in Cantabria is a true treasure for travelers. Its streets; palaces and stately homes; Santa Juliana Collegiate Church and museums - such as the Regina Coelli Religious Art Museum, all await your discovery.  A journey into our past at the Altamira Neo-Cave and its museum should not be missed. Other recommendations include Comillas - home to Gaudi´s `El Capricho´, Santander and the Cabarceno Nature Reserve. Interesting options further west include the magnificent El Soplao Cave and charming coastal towns such as San Vicente de la Barquera. 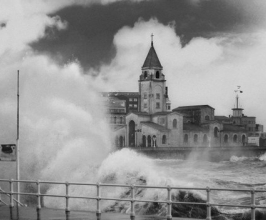 The Parador de Gijon in Asturias occupies an early 20th century mill located by a tranquil pond in the Isabel La Catolica Park, one of the most beautiful green areas in the charming Asturian coastal city of Gijon.

Within short walking distance of the Parador are the bay, San Lorenzo beach and the historical Cimadevilla fisherman´s quarter.

The Parador´s interior recreates a cosy, welcoming atmosphere with comfortable, sunny areas to relax.  The large windows draw in the natural surroundings and remind one of the closeness of the sea.

HIGHLIGHTS: Gijon - historic; commercial; industrial; where the sea, the gentle mountains, and the city come together to create one of the most attractive urban areas in northern Spain. San Lorenzo Beach, the esplanade, the marina, the Semana Negra (Black Week) festival, an active social life and festive atmosphere all invite visitors to discover this charming city. However, its attractions are not limited to those already mentioned, Gijon has a network of museums and a multiplicity of cultural offerings, including an international film festival and Latin American Book Show. Some of the town’s museums are noteworthy for their originality, among them the Railroad Museum (Museo del Ferrocarril), the International Bagpipe Museum, while others preserve its illustrious past, the Birthplace of Jovellanos, Nicanor Pinole Museum, Revillagigedo Palace, among others. 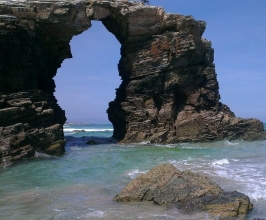 The Parador de Ribadeo occupies a large Galician house at the mouth of the Eo, a marine and tourist enclave on the Galicia/Asturias border. Its magnificent position offers the possibility to contemplate unique views of the Galician countryside, the Eo estuary and the small Asturian villages on the other shore; those which can be seen from the dining room are extraordinary. A maritime ambiance prevails on the inside, with an air of grace and elegance. The bedrooms are friendly and comfortable, and some have splendid panoramic views. The restaurant offers traditional Galician cuisine with dishes such as savory pies, pork shoulder, seafood and hearty Galician broths.

HIGHLIGHTS:  Ribadeo - As we near the end of our route, it offers the opportunity to discover extremely beautiful places including the amazing Cathedrals Beach which natural sea carved stone arches appear like a cathedrals giant flying buttresses. See also those coastal areas along the Ribadeo estuary. We recommend too San Damian Fort, Do Santos Bridge and the nearby town of Castropol. 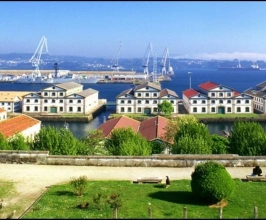 Parador de Ferrol - In the centre of Ferrol, an attractive, seafaring city, the Parador rises up, recreating in its image the essence of a Galician mansion with glazed galleries and a singular marine setting. The decoration displays nautical elements, world maps and navigational instruments in the common rooms and spaces. The main staircase has an ancient lamp from a boat and the maritime motifs abound in the living rooms. The bedrooms are spacious and boast ochre and dark shades; some, with viewpoints and balconies, are favoured by magnificent views over the port. The restaurant offers a wide and varied display of exquisite Galician cooking. Its most representative dishes are 'pulpo a la mugardesa' (octopus with potatoes), 'rape a la corunesa' (Coruña style monkfish) and 'sopa ferrolana' (local seafood soup). The typical cake from Ferrol justly heads the dessert menu.

HIGHLIGHTS: Galicia opens its doors to you through this seaside town, where you can visit the Magdalena Quarter and the area around the navy yard. Beaches and nearby natural sites offer a variety of interesting options. Those interested in the history of Spain may be interested to know that Ferrol is where General Franco was born. 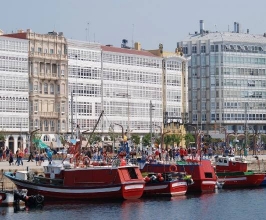 We highly recommend visiting the nearby city of A Coruna whcih has a variety of interesting sites, such as the Lighthouse of Hercules, San Anton Archeological Museum, San Carlos Garden, and the baroque Dominican church. 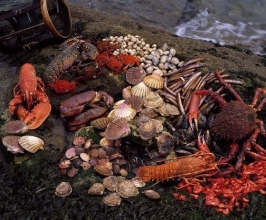 The building itself is a veritable museum along Gothic, Renaissance and Baroque lines.  Outstanding features of the Parador de Santiago de Compostela include the Plateresque doorway, the inner courtyards and the chapel. Furnished with antiques and works of art, most rooms look out on four arcaded patios with fountains. The public rooms are elegant while throughout the entire building there is a strong sense of the past revisited.

All bedrooms are equipped to the high standards you would expect from a hotel of this category. Guests may enjoy traditional Galician cuisine in the parador's exquisite restaurant; an impressive stone vaulted room. The excellent location of this Parador; right on the Obradoiro Square, makes it possible to easily enjoy on-foot all that this city has to offer. Within minutes of the hotel there are a whole host of restaurants, bars and cafes.

HIGHLIGHTS:  Santiago de Compostela is a UNESCO World Heritage City, and offers travellers numerous historical sites to visit: Obradoiro Square with its beautiful Santiago cathedral; the university square; the `ruas´ along which you can stroll and experience the life of this important university city’s inhabitants; palaces and churches, and museums such as the cathedral museum, Museum of the Galician People, or the Galician Center for Contemporary Art. You cannot help but be seduced by this city; and the Parador hotel is one of the finest hotels in the world. In fact it is said that it is, one of the first hotels in the world.

After breakfast you’ll be collected at your hotel by a private driver who will transfer you to Santiago de Compostela Airport for your departure.

Driving routes in Spain
Driving the Camino de Santiago in Spain
The Many Ways of Doing the Camino de Santiago. What’s yours?
What to See in Galicia in Northern Spain
Altamira Caves and what esle to see in Cantabria
Cantabria Cave Paintings
Gaudi in Cantabria
Totally Spain’s Guide to Walking Cantabria’s Camino Lebaniego
Apple Cider and Fun in Gijon, Asturias
A Trip to Asturias – The Rural Charm, Excellent Seafood & Unspoilt Beaches in Northern Spain 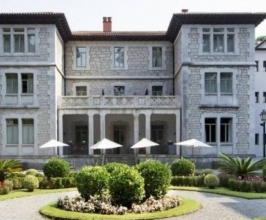 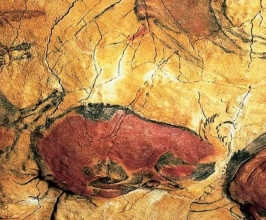 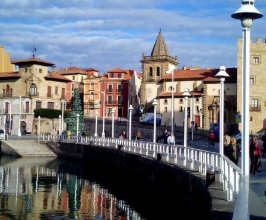 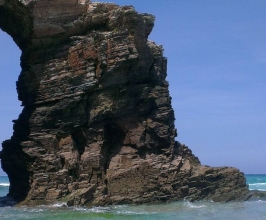 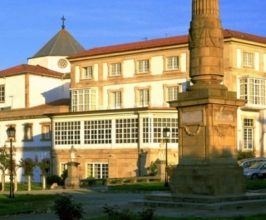 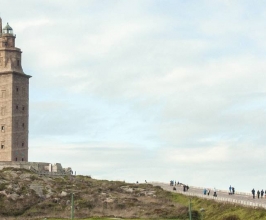 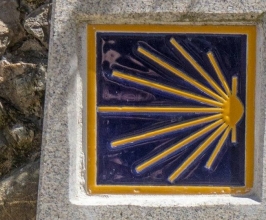 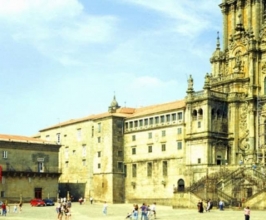 Belen at Totally Spain went above and beyond all our expectations for our month long vacation touring Portugal and Spain in September, 2021. Every hotel/apartment (12 of them!), winery, train, rental car, tour, tour guide/driver, restaurant recommend...